Powershell Challenge: Check if a new Powershell Core version is available and install it after confirmation

This week, I had some time off to enjoy the holidays.
So naturally, I was playing around with Powershell, just nice relaxing code. I found something on my computer had to be done manually and it was bugging me. So, a New Powershell Challenge is born. No rules, no risks, just a goal to reach, Google available and let’s try to see how far we can come.

(just looking for the script? Scroll all the way down or find it here.

I have been working with Powershell Core for some time and love how it keeps getting better and better. I do forget to install new versions. Even if I hear about it on Twitter, I’ll procrastinate and then I’ll forget.

So what I want, is a script that I can run as a scheduled task. It has to check my local version of Powershell and compare it to the last available version available from the Powershell-Github. If they are different, I should be notified and able to install it right there and then. Some manual action is ok, as long as it is close to next-next-finish.

At this point, If you like a challenge I encourage you to stop reading and try to build this on your own. Do share results in the comments!

Let’s break the goal down into subgoals:

Something that I didn’t think about when I started: testing. My computer was all up to date. There was no installation to be done, so I could only test the three two steps. Lucky for me I had a few busy weeks at my job and my work-laptop was still a few versions behind. On top of that, I had an msi-file for an old version of Powershell Core Preview in my downloads-folder. So all testing could be done that way.

Get the installed Software version.

There are two ways I could think of to check currently installed software on a computer: Check the registry, or use WMI.
The command for WMI is quite straightforward:

The other way is through the registry. The initial line is a tiny bit more complicated, as the programs are sorted by their IDs instead of their names. It took some Googling to get the right syntax, which I got mostly from pages like this one and a bit of trial and error.

So the output in this case is basically the same.
I tried to find out if one of them is better in the sense of “more correct”. I couldn’t really find a straight answer. So I looked at another aspect:

To make it possible to check the preview-version separately, I set it up with a variable for the name. So now it looks like this

Get the latest version from the powershell Github

This wasn’t too hard, as I had set it up before for my script to install powershell Core (my very first blogpost). Since then, I had learned about a script in the Powershell Github to install Powershell, that uses a better way than my own script.

So that metadatafile has the information I need and the $Release-variable is almost exactly what I need.

Als you can see, I combined the if-loop for the $Preview-switch so it handles the local version and the release at the same time.

After that I just had to remove the “preview”-string from $release and now I have two values in more or less the same format that are ready to compare: $PwshCurrent and $Release
(This is also the point where I realize my variables don’t have the best names. But trust me: I’ve done a lot worse. I fixed it in the final script.)

Comparing the local version to the latest release

This is a very basic loop on it’s own.

I wrap it in another-loop that states that $PwshCurrent must have a value. This is because I don’t want this script to run when no local version was found. The result is this:

I use Return to make the loop stop at that point, as no action is needed.

I did think about using -lt or -le or something like that for the comparison, as it’s more precise. But I couldn’t think of a case where the version online would be older than the one on the computer. So this is good enough.

The easiest way to do this to me is with the wscript popupmethod, as descriped here.
I have used it before and it is quite easy to use, but it’s also quit old and Windows 10 comes with Toast notifications that look so much better

So I played around with the BurntToastModule. I got some great results.

Only one tiny problem: The “update now”  button doesn’t work.

I eventually gave up as I was getting frustrated. I moved back to the wscript-method, which is quite easy when you keep this page) next to your script.
So with the if-loop from the last step, I can take that output and turn it into a popup.

As you see I have set a variable to show what program it checked, so it will give a different output when $Preview was active.

As I said before, this was the subject of my first blogpost.
After I published that, I was alerted that the powershell Github has a script for just this goal. And it’s a lot better than my script.

My timing was good though, as the script had just been updated to include preview-versions and MSI-install.
So I copied the script to my computer and called it from my script:

This gave two issues when the script was completed:

Update 29/3: The install-script has since been changed and doesn’t require to uninstall the old version before installing the new version. Inspired by Thomas Maurer’s post, I now use the following install-line. This also means that you don’t have to keep a second script on your computer. I have left this piece of the blog because it was a learning experience, but all the scripts have been updated.

For the first issue, I set up a try-catch to get the error message. It turns out that the scheduled script was running in a different folder, which made sense. So I changed the lines to include the full path.

The second issue was with the new install and the old install not working together very well. The old version still exists on some level, which made the new release unstable.
I could have spend more time to investigate what’s going on, but I found that there was no problem when you uninstall the old version before installing the new one. As I didn’t see a downside to this approach, I went for it.

To run this from Powershell, you need to start CMD from the script. (or play around with getting the value so you can run msiexec.exe from Powershell, but I found this actually makes things more messy.)

Google led me to this site and I came up with this:

This uninstalls the current version. It does ask for confirmation though.
I played around with the msiexec.exe-options as explained on This site, but the quiet options didn’t seem to work well. As I don’t really care about pushing a button, I left it like it is and actually added a popup to announce the confirmation


Put it all together

I wrapped the lines in a function I called Get-PwshUpdates, with a switch parameter for $Preview

At the bottom of the script I called it twice, once for the regular version, one for preview.

I saved the script and set up the scheduled task. The task starts a program.  It then runs Powershell.exe with the following arguments: 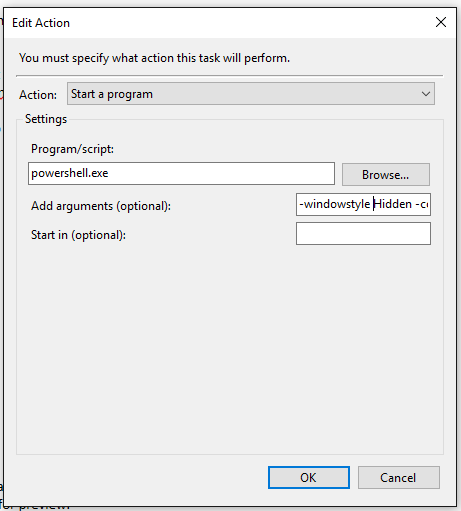 The task needs highest privileges for the installation.

Update: For some reason, on my homecomputer this task completes with an error. The only obvious difference between the two devices is the executionpolicy, but another scheduled script did’t have issues. For my home computer, I use these arguments:
-ExecutionPolicy Bypass -windowstyle hidden -file "C:\Scripts\Get-Pwshupdates.ps1"

So this works!  All I have to do is push yes, ok, yes, next,next, finish (and of course carefully read the License agreement).

(pause between the gifs as I was on a holiday with a bad internetconnection, so the download took ages)

This is the final script:

All in all, a very fun experience and I actually created something useful. But mostly I gained knowledge and found some things that might be worth contributing to in the feature, when I feel like actually working neatly :-).
If you know a better way to accomplish these goals, please let me know in the comments!